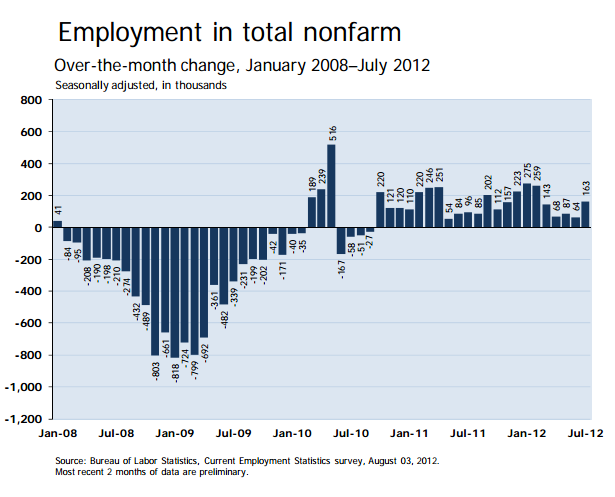 I was tied up Friday, so here’s recap/analysis of Fridays jobs report and rate reaction from me and colleague Dick Lepre. Also adding links at bottom to other important jobs analysis.
___ 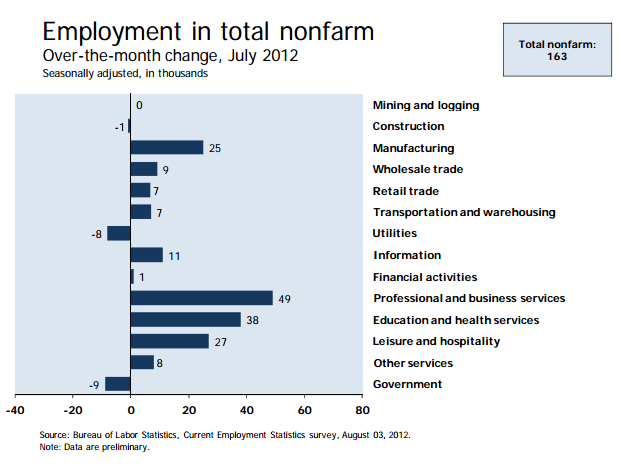 Rates rose off record lows Friday after a BLS report showed the U.S. economy added 163k non-farm payrolls in July. This isn’t a strong number but it exceeded expectations of 100k and broke a four month streak of much weaker results. June was revised down from 80k to 64k, and May was revised up from 77k to 87k.

Unemployment rose slightly from 8.2% to 8.3% according to a different component of the jobs report called the ‘Household Survey’ which counts people—12.8 million are unemployed. But a more bleak stat that doesn’t make headlines is that another 8.2m are working part time because they had hours cut or can’t find full time work.

RATE REACTION
Rates rise when mortgage bonds (MBS) sell off, and this is what happened Friday because of this jobs news plus some less reported news of critical groundwork being laid to help Europe’s debt crisis.

The Fannie Mae 3.5% and 3.0% coupons—key benchmarks lenders use to price consumer rates—were down 28 and 47 basis points respectively. As a result, rates closed the week about .125% higher.

Friday’s BLS Employment Situation report shows that the civilian noninstitutional adult population increased by 199,000 in July. The percentage of the population who participate in the labor force was 63.7%. We needed 126,700 more jobs in July to keep the labor participation rate the same. We got 163,000. Equities are rallying and Treasuries are selling because we have a mediocre BLS Report rather than a terrible one. Think about that: 36,300 more real (population adjusted) jobs and the Dow is up 240 as I write this sentence.  Equities are rallying because the previous 4 BLS reports were terrible.  This one is mediocre.

Keep in mind that there are two BLS Surveys: the Establishment and the Household.

Reading beneath the surface:

-The labor participation rate (percent of adult non-institutionalized population who are part of the labor force) was 63.7% down from 63.8% in June. It was 64.0% a year ago. (H) This, not the unemployment rate, is the number which should get everyone’s attention. Some of this is structural and some is cyclical.

The labor market is extremely dynamic. The number of people moving in an out of it each month is almost 100 times as large as the net change in jobs. Each month we try to look here at the dynamics of this market.

In July 2012 BLS measured 4 sets of people entering or leaving the jobs market:

The presentation of the total change in jobs is like looking at the final score of a game. The details tell the story:

This month’s reports may sound confusing on the surface. More people are working, the Civilian labor force was down by 150,000 but the unemployment rate went up. Sounds strange but the unemployment rate is the number of people from the Household Survey who say they are unemployed (12,794,000) divided by the Civilian Labor Force (155,013,000) or 8.253% which was rounded up to 8.3%.
___