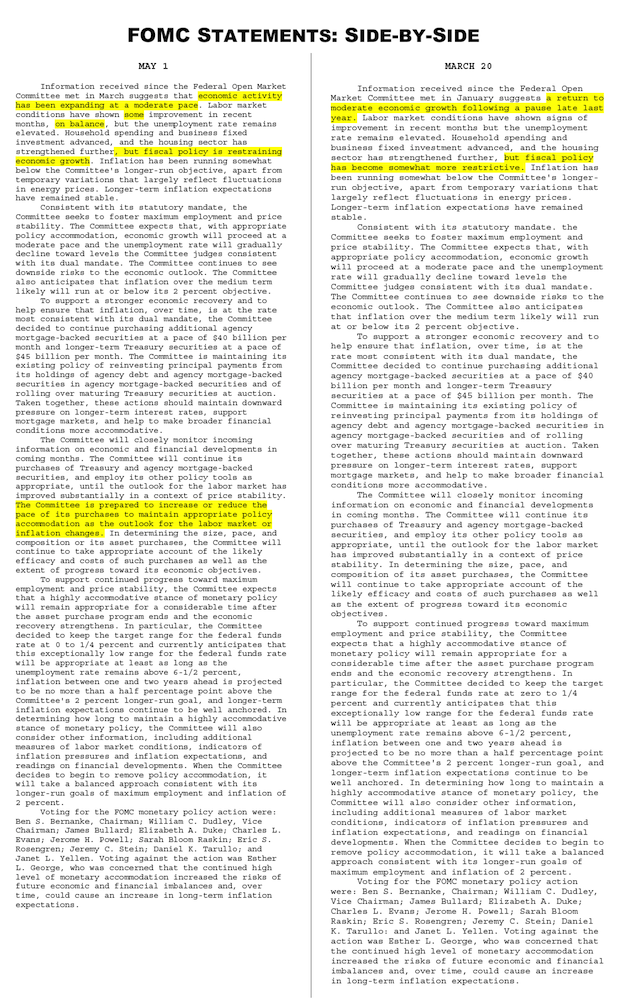 Not much yellow editing between last Fed statement and today’s. Rate and quantitative easing policies remain the same. As such rates are still holding just above record lows. MBS levels (Fannie 30yr 3% coupon at 104-24) suggest rates should be lower but lenders are holding the line on improving consumer rate pricing (beyond the substantial improvements since April 5) to see first if there’s a late day selloff today, and if Friday’s April jobs report is another bust like the March jobs report released April 5. Today’s ADP report was disappointing, but ADP is not a great BLS jobs report predictor.

Rates are about as good as they’re going to get before Friday because lenders will remain cautious until then. That said, rates are at their lows for 2013 and just a hair above all time record lows.

We’ll have to wait three weeks until the minutes from today’s meeting are released to get more details on the full views of Fed rate policymakers. After the minutes from the December and January meetings were released (on January 3 and February 20 respectively), rates rose because the minutes revealed in both cases that Fed officials advocated for backing of quantitative easing as soon as year-end 2013. If the same thing happens again, rates will rise again.

In the meantime, lenders proceed with caution. And rate shoppers shouldn’t sleep.

___
Thanks to Paul at William Blair for this!