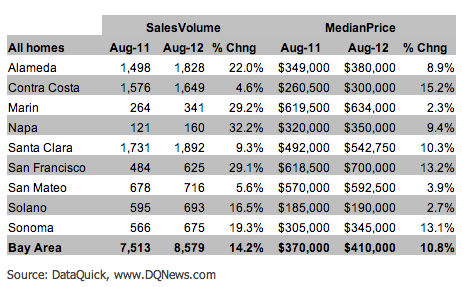 Below are some key stats from DataQuick on Bay Area real estate last month. I’m leading with a bullet on lender market share stats. My mortgage bank is the only private firm mentioned among the big dogs. Feels pretty good. It’s been a long slog since 2007, and it’s nice to see some positive signals along the way … for my company and for all my fellow Bay Area home owners.

– The most active lenders to Bay Area home buyers In August were Wells Fargo with 17% of the market, RPM Mortgage with 4.6% and Bank of America with 3.3%. A year ago, Bank of America’s market share was 8.2%.

– Government-insured FHA home purchase loans accounted for 16.1% of all Bay Area home purchase mortgages in August, down from 21.1% a year earlier.