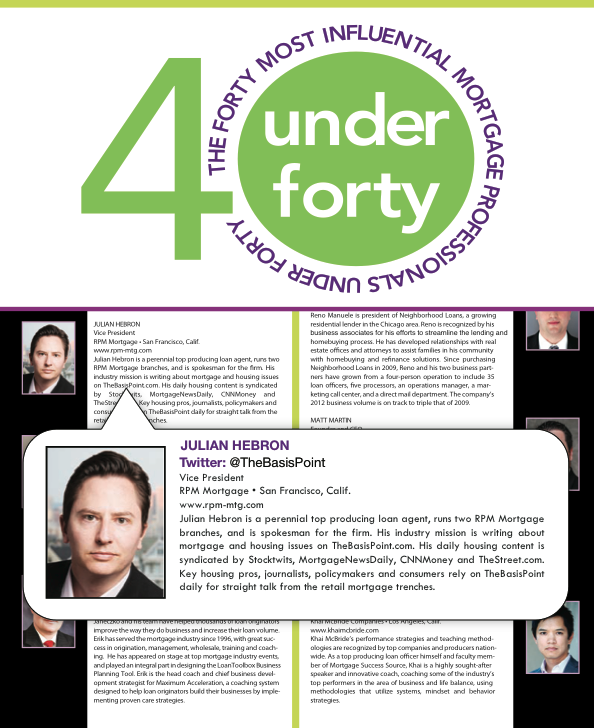 It’s a toss up deciding what’s been harder in recent years: slogging through the mortgage and housing meltdown from 2007 through 2010, or having spotty jumbo product from 2011 to mid-2012.

But I suppose I have to go with the latter. Not because it’s more recent and I’ve forgotten the former by now—far from it, I’ll never forget that era. I learned my wife was pregnant with our first child a few months after mortgage securitization markets froze solid in August 2007, and we checked into the hospital to deliver our son on Sunday, September 7, 2008, the same day Fannie and Freddie were taken over by Treasury to avoid collapse of the mortgage giants and the U.S. economy.

Still, as deep-seated as those events are to me and my clients and my industry colleagues, the harder part for me has been from 2011 to mid-2012. The old cliche “it’s darkest before the dawn” rings true here. This was a time when jobs and housing recovery signals in my core markets became more clear, yet the market for jumbo mortgages was still almost nonexistent.

There’s nothing harder than feeling like you’ve risen up to be among the best at what you do but don’t have the best product at your disposal. It was like being a smartphone salesman going door to door with a briefcase full of Blackberries.

Most jumbos being done were by large retail banks with no intent to securitize but rather just hold those loans on their balance sheets. Meanwhile the brokers got cut off as big banks redoubled on retail. And the third channel—mortgage banks like my firm—had to find ways to grow and evolve while waiting out the jumbo drought because we weren’t large enough to just keep accumulating assets (3 main lender types: retail bank, mortgage bank, mortgage broker).

I remember our CEO telling all the jumbo market folks like me back in early-2008 to “get your head out of the sand” and acknowledge that Fannie/Freddie/FHA lending would be the only game in town for awhile. As deep as my head was in the sand, “awhile” sounded forebodingly like the Fed’s “extended period” stimulus language. Thankfully it scared me sooner rather than later, and I refocused my efforts on two areas:

(1) Focus on point of sale rather than product – When every mortgage firm and person was in peak panic mode from August 2007 through early-2009, most loan agents made decisions based on product. “I need product for my clients” was the overwhelming refrain. Big banks were the obvious way to fill that void. During that time, I took a different approach. While everyone was trying to lock up product, I was trying to lock up point of sale. Products and pricing come and go. So my theory was if I had key institutional relationships, I’d have access to best products and pricing. So while everyone was scrambling for product, I pinned down a lending partnership with one of the largest real estate brokerages in San Francisco and won the loyalty of influential builders. It’s an oversimplification to say that in one sentence now. Obviously it was the result of many years of work. But the point is this: controlling point of sale is the only thing that matters because, as all agents who’ve seen their big and small firms disappear overnight know, product can be taken from you on a moment’s notice. Relationships are something you can control. If you control large institutional point of sale deals, it doesn’t matter where the product moves. You’ll get it. As noted above, jumbo was spotty until mid-2012, but jumbo is finally back for those left standing.

(2) Cut marketing costs by redirecting all resources to the web – As mortgage markets went sour in 2007 and eventually took down the global economy with them, Twitter and iPhone were rising up and reinventing marketing and the web overall. Twitter’s tipping point was March 14-18, 2007 when it went from 20,000 to 60,000 tweets per day at the South By Southwest music festival. And the first iPhone was released a few months later on June 29, 2007, forever changing how people interact and do business. When I chronicled The Rise of Twitter and The Fall of Finance a couple years ago, it hit me: the old ways of branding and client interaction—advertising, postcards, refrigerator magnets—were so dead it’s (almost) not even funny. Plus they were expensive while the web was cheap. So I very slowly embraced the web, first by blogging, then Twitter. I say very slowly because I was anonymous for years until I learned how to represent my industry responsibly and appropriately. When you’re anonymous, your voice is different. Some are more truthful when anonymous. For me, it was the opposite and I was holding back. Now I’m a lot more comfortable sharing experiences from the housing market trenches. That’s what consumers need to know, and that’s what I’m trying to do on behalf of all my industry colleagues who can’t or won’t.

All of this brings me to the topic of influence. The people who influenced me most during the crisis years were those who knew how to think clearly in a storm. Clear thinking enabled them to steady the ship and plot the right route forward … for them and their crews.

So as I take a moment to enjoy my 40 Most Influential Mortgage Pros Under 40 honor (for the second year in a row and my last—I’m 39!!), these are the kind of pros I want to keep learning from and this is the kind of pro I strive to be.

Below is the announcement my firm sent out today about this annual list by National Mortgage Professional magazine, and why I was included.

To all of my industry colleagues around the country, the other 39 rising mortgage leaders, and National Mortgage Pro magazine, I humbly offer my respect. Let’s make our industry shine in 2013.

“This year’s ‘40 Under 40’ list recognizes the new mortgage industry leaders who remain steady despite unprecedented economic and industry uncertainty,” said NMP magazine publisher Joel Berman. “Like the housing finance pioneers before them, these 40 pros set the bar for education, professionalism and integrity in the mortgage industry.”

In addition to being a perennial top producing loan agent and running two San Francisco RPM branches, Hebron serves the industry by writing daily about U.S. mortgage and housing issues on his blog, TheBasisPoint.com. His daily housing content is syndicated to Mortgage News Daily, Stocktwits, CNNMoney, Yahoo Finance and TheStreet.

“Now in his tenth year with RPM, Julian has emerged as one of our firm’s key leaders,” said RPM CEO Rob Hirt. “His technical expertise in consumer lending and technology combined with his management and client service skills make him a great role model for our current and future loan agents.”

Prior to RPM, Hebron was director of marketing for UBS Global Asset Management, one of the world’s largest money managers. He’s been writing about markets and housing for 14 years.

RPM Mortgage, Inc. is based in Alamo, California and is a private, family-owned mortgage banker and broker whose roots in the Bay Area stem back to 1986. RPM has over 60 branches and can lend in California, Nevada, Texas, Colorado, Oregon and Washington and has over 800 loan agents and employees. RPM Mortgage is a retail only lender and a direct seller and servicer of Fannie Mae loans. RPM’s loan agents are specially trained to offer jumbo, conforming, FHA and VA loan programs to their customers. They work with borrowers, realtors, CPA’s, financial planners, attorneys and financial consultants to provide home buyers and owners with the best financial solutions in the market today.