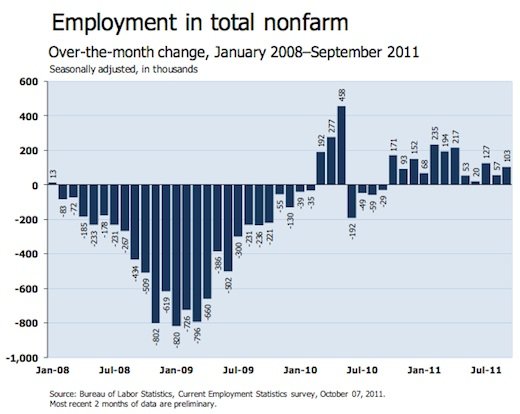 Rates continue higher today on mortgage bond selling (FNMA 3.5% coupon down about 40 basis points) after this morning’s BLS report showed the economy added 103k non-farm payrolls in September. Plus August was revised from zero to 57,000 new jobs created and July was revised from 85k to 127k. This figure doesn’t count actual people, it counts how many companies opened or closed, then uses that data to estimate the number of jobs gained or lost.

Unemployment held at 9.1% according to a different part of the jobs report called the ‘Household Survey’ which counts people. Stocks also down today but not as much as bonds. This bond selloff and rate rise has been the theme all week. More in WeeklyBasis recap tomorrow. Jobs charts below, plus key points on today’s jobs data from CME trader Jeff Carter. 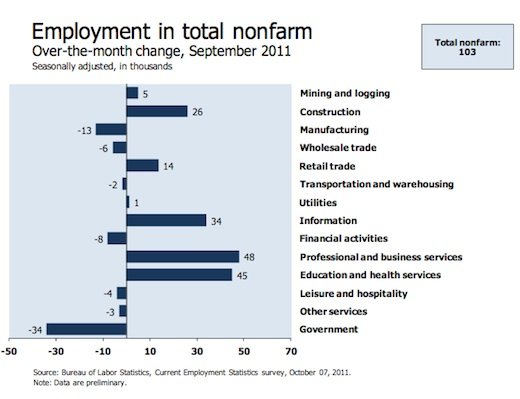 The U-6 rate hit a 2011 high of 16.5%. “The U-6 figure includes everyone in the official rate plus “marginally attached workers” — those who are neither working nor looking for work, but say they want a job and have looked for work recently; and people who are employed part-time for economic reasons, meaning they want full-time work but took a part-time schedule instead because that’s all they could find.” U-6 is probably even uglier than that because we have had a lot of people simply drop out of the workforce.

Our current supply of idle labor is mostly in the construction and manufacturing industries. Those industries are dead. That supply needs to re-tool themselves. However, a lot of the demand for labor is for highly skilled engineers or programmers. It takes a lot of time to learn those skills.