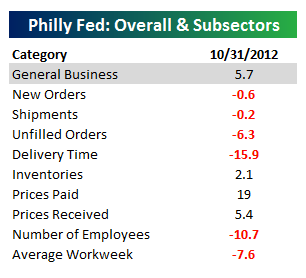 Rates have been rising this week on economic data that’s beating expectations. Today’s data rundown below, and here’s rest of the week’s Fundamentals.

The sad thing is that all this says is that the method of collecting data and making seasonal adjustments is woefully inadequate.  Whether is is BLS, GDP or the weekly Initial Jobless Claims data the errors are of the same order of magnitude as the changes in the data.  This evokes the image of that left field field line umpire who make the infield fly call 0.2 seconds before the ball hit the ground.

Discretion calls for only paying attention to the 4-week Moving Average.

Leading Economic Indicators (September 2012)
– LEI Month/Month was +0.6%.
– This is a rehash of other data.
– The components are not all dancing to the same rhythm: Equities are up. New orders per ISM were down and consumer expectations were down.

Philadelphia Fed Survey (October 2012)
– General Business Conditions index was +5.7.
– Zero is dividing line between expansion and contraction.
– This is the first positive reading in six months.
– Like LEI, the components are less encouraging see this Bespoke table:

Here’s the full report and a trend graph: 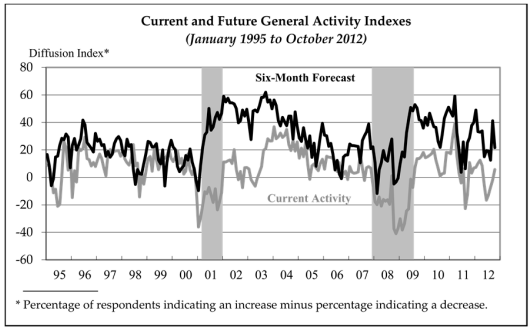 And here’s lots of charts from Bespoke.