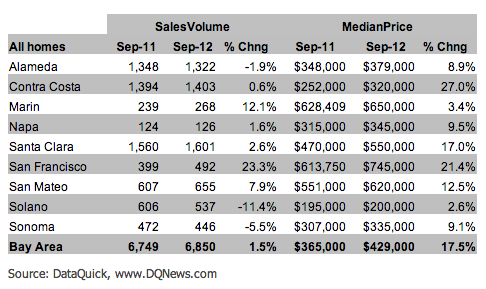 Below is a highlight of some key Bay Area home market stats for September from Dataquick. My firm, RPM Mortgage, is in the number two lender market share slot behind Wells Fargo and ahead of Bank of America for the Bay Area.

– Foreclosure resales are at half the level of a year ago.

– The number of homes that sold last month for less than $500,000 fell by 12.4% percent year-over-year, and sales above that threshold increased 20.7 percent.

– Jumbo usage dropped to 17.1% in January 2009. Before the credit crunch struck in August 2007, jumbos accounted for nearly 60% of the Bay Area purchase loan market.

– The most active lenders to Bay Area home buyers last month were Wells Fargo with 14.7% of the market, RPM Mortgage with 3.7% and Bank of America with 3.4%.