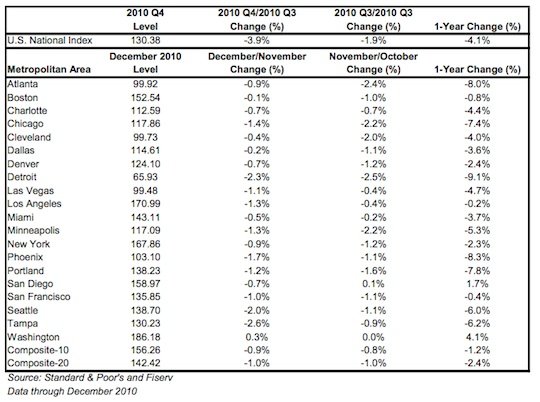 The S&P Case Shiller December 2010 report of existing home sales showed average U.S. home prices declined 2.4% from December 2009. This is the seventh consecutive month of weaker data, which reflects sustained foreclosure volumes and high unemployment that are a drag on economic improvement. Home prices are at similar levels to what they were in Q12003. Two graphics that tell this story are shown below, as is the full press release. 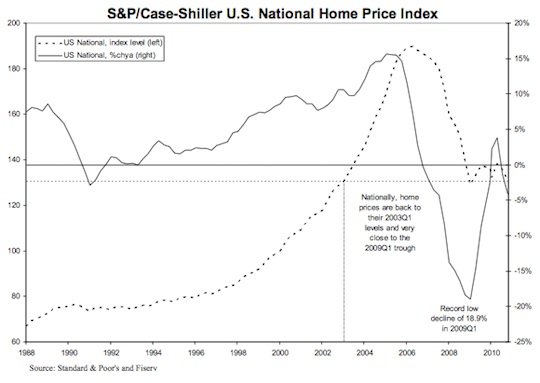 The index tracks existing single family homes, and is a credible pricing barometer for broad market analysis because it excludes condos and new construction. Condos can have more volatile pricing, and new construction pricing can be artificially set by builders, especially in times of distress when discounts an incentives can skew pricing. S&P refers to 10 and 20 “City” Composites, but these are actually metropolitan regional areas, not just cities. For example, where the city says San Francisco, this isn’t just San Francisco, but rather 5 counties in the Bay Area region (see page 9 of this PDF): Alameda, Contra Costa, Marin, San Francisco, San Mateo.

FULL TEXT FROM PRESS RELEASE
Data through December 2010, released today by Standard & Poor’s for its S&P/Case-Shiller Home Price Indices, the leading measure of U.S. home prices, show that the U.S. National Home Price Index declined by 3.9% during the fourth quarter of 2010. The National Index is down 4.1% versus the fourth quarter of 2009, which is the lowest annual growth rate since the third quarter of 2009, when prices were falling at an 8.6% annual rate. As of December 2010, 18 of the 20 MSAs covered by S&P/Case-Shiller Home Price Indices and both monthly composites were down compared to December 2009. Both Los Angeles and San Francisco reported negative annual rates of return in December, leaving San Diego and Washington DC as the only two cities where home prices are increasing on a year-over-year basis, +1.7% and +4.1%, respectively.

The chart above depicts the annual returns of the U.S. National, the 10-City Composite and the 20-City Composite Home Price Indices. The S&P/Case-Shiller U.S. National Home Price Index, which covers all nine U.S. census divisions, recorded a 4.1% decline in the fourth quarter of 2010 over the fourth quarter of 2009. In December, the 10- and 20-City Composites posted annual rates of decline of 1.2% and 2.4%, respectively. Thirteen of the 20 MSAs and both monthly Composites saw their annual growth rates fall in December versus November.

“We ended 2010 with a weak report. The National Index is down 4.1% from the fourth quarter of 2009 and 18 of 20 cities are down over the last 12 months. Both monthly Composites and the National Index are moving closer to their 2009 troughs. The National Index is within a percentage point of the low it set in the first quarter of 2009. Despite improvements in the overall economy, housing continues to drift lower and weaker.” says David M. Blitzer, Chairman of the Index Committee at Standard & Poor’s. “Unlike the 2006 to 2009 period when all cities saw prices move together, we see some differing stories around the country. California is doing better with gains from their low points in Los Angeles, San Diego and San Francisco. At the other end is the Sun Belt – Las Vegas, Miami, Phoenix and Tampa. All four made new lows in December. Also seeing renewed weakness are some cities that were among the last to reach their peaks including Atlanta, Charlotte, Portland OR and Seattle, where news lows were also seen. Dallas, which peaked late, has so far stayed above its low marked in February 2009.”

“The 10- and 20-City Composite indices remain above their spring 2009 lows; however, 11 markets – Atlanta, Charlotte, Chicago, Detroit, Las Vegas, Miami, New York, Phoenix, Portland (OR), Seattle and Tampa – hit their lowest levels since home prices peaked in 2006 and 2007. We have seen more markets hit new lows in each of the past three months.”

“Looking deeper into the monthly data, 19 MSAs and both Composites were down in December over November. The only one which wasn’t was Washington DC, up 0.3%. With December 2010 index levels of 99.73 and 99.48, respectively, Cleveland and Las Vegas have the dubious distinction of average home prices now below their January 2000 levels. Detroit was the only market that was in that group prior to December.”

Six cities showed an improvement in their annual growth rates in December as compared to November 2010 – Charlotte, Chicago, Cleveland, Dallas, Denver and Washington DC. However, for five of these cities the improvement only means their annual rates are less negative than what was reported in November.

Eleven MSAs posted new index level lows in December 2010, since their 2006/2007 peaks. These cities are Atlanta, Charlotte, Chicago, Detroit, Las Vegas, Miami, New York, Phoenix, Portland (OR), Seattle and Tampa. Nine of these cities had also posted lows with November’s report as well. New York and Phoenix are the new entrants to this group with December’s data.

The monthly statistics show that 19 of the 20 MSAs and both the 10-City and 20-City Composite were down in December versus November and all have displayed this negative trend for three consecutive months. The only exception was Washington DC which posted a 0.3% improvement over its November levels.