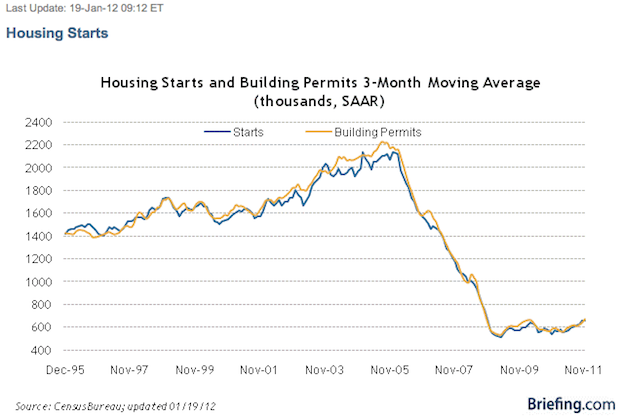 There should be 1,500,000 annual Housing Starts to keep pace with population growth and scrappage. Relaxed mortgage underwriting led to increased supply and the recession has created more supply (foreclosures) and lower demand leading to still decreasing home prices. The housing market is not going to return to normal until the foreclosure inventory is cleared and values stop falling.

Philadelphia Fed Manufacturing (January 2012)
-Index of manufacturing activity in Philly region rose to 7.3 for January
-Region is: Eastern Pennsylvania, Southern New Jersey, Deleware
-This is down from a from a revised 6.8 in December (was 10.3)
-Zero is the dividing line between expansion and contraction
-Fourth straight monthly gain even with revision down for December
–Full report