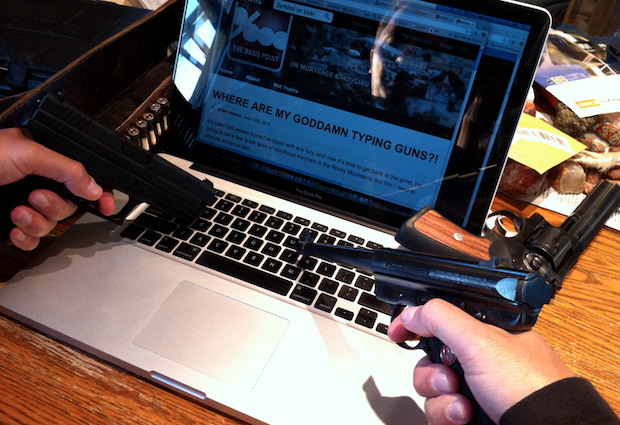 Back when Rob Riggle was on The Daily Show, he did this bit where he returned to the office after an assignment and frantically asked people where his typing guns were. Super funny. I knew it had to be my re-entry post headline after vacation. Problem is that I couldn’t find any pictures or video of the bit.

So I shot my own version of the picture while visiting the town I grew up in, reconnecting with people I hadn’t seen in 25 years or more. It went like this:

Me [half joking]: Can’t find Rob Riggle typing guns. I’m gonna have to do it. Where can I get typing guns?

Me [already dialing]: That’s my girl.

Me [into phone]: Hey man, can’t wait to see you. And also, I’m curious: do you have two pistols? I just need to do a quick thing with my laptop.

Werner: Shooting up a laptop? Can do.

It’s just like that with a childhood best friend. Guns when you need them. No questions asked.

So I set up the shot above and my wife took the pictures while Werner did his best to keep our three-year-old son away from the gun table.

Writing that last part, I don’t know whether to laugh or cringe, but that’s how a simple idea for a blog post played out. Sharing it because it captures the true joy and challenge of writing pretty well.

Now it’s been more than two weeks since I’ve typed with any fury, so it’s time to take aim again. To reload, I’m going lay out a few more of my own writing rules like I’ve done after previous breaks.

YOU DON’T ALWAYS HAVE TO HAVE A POINT: Good writing must have structure, and most pieces should have a clear point. But I tend to be slowed down by structure and the search for a clear point. Often the analysis prevents me from even starting something. This very post is an example of starting with one single idea that’s not enough to stand on its own and seeing where the simple act of writing takes it. This is critical for all writers, whether they’re returning from a hiatus or they want to start a blog. Just write. You’ll find your voice and your point soon enough.

THE IMPORTANCE OF WASTING TIME: I spent the early part of my vacation watching TV like it was my job. Letting my writer brain go numb as I honed my remote skills. By writer brain, I mean the part of you that can automatically weave daily routine and chatter into something with a clear point, structure, and appeal. By remote skills, I mean old school style. No Tivo, just straight cable, flipping up and down the dial with full comercial interruptions. No on-screen menu, so the plan is made on the fly. You might have a big score like catching Die Hard just as Bruce Willis arrives in LA, but you must have Spike’s World’s Worst Tenants and MTV Movie Awards ready to flip to within the first nanosecond of a commercial. Yea too much TV makes you numb and all, but it’s incredibly gratifying when a slacking session like this comes together. It also lets you step away from the obsessive nature many writers and market pros have so you can take an honest look at yourself … which helps your writing and your market decision making.

WORK IT OUT IN THE OPEN: This is related to the first point. You don’t have to solve everything before you start writing. You can use the writing to help you solve problems or explore concepts you don’t fully understand. As the New York Times recently said about BusinessInsider’s blogging machine Joe Weisenthal: “He often works through issues in full public view, sharing an initial impression, then adding and revising and sometimes changing his mind.” Again, this is a weakness of mine because my tendency is to want to have all my concepts sorted out before I even tackle a certain topic. A lot of it stems from my fear of being wrong on market calls. But I’m trying to get better at just putting it out there.

BLOGGING IS MEDIA – TAKE IT SERIOUSLY: Blogging is media even if it’s not mainstream. Once you hit Publish, it might be front page news, even if it’s talking about guns and your three-year-old in the same sentence. Making the front page is rare, but the good news is that blogging leads to other media opportunities. I’ve been a housing source for journalists for years and take it very seriously. They win because I’m not feeding them propaganda, and I win because I get my name out there. Actually my name is out there less than the work that I put into it. Often the conversations I have with journalists are strictly background to flesh out a concept for them and I’m not cited. But I don’t see that as being any different than doing an initial consultation for a client who ends up working with a competitor: I still must perform at top level to maintain a smart, honest reputation. All of this work of course leads to the question: how do you have so much time to do this? Isn’t it distracting you from your job? My friend Josh Brown answered these questions awhile back, and the quick summary is:

If you take it seriously, it’s part of your job.

So with these rules laid out and my typing guns in tow, I’ll be resuming my daily routine.

Special thanks to my wife for the idea and to Werner for his assistance. Maybe I’ll share a story or two of childhood mayhem in the Rocky Mountains if he lets me…
___

Reference:
How Do You Have So Much Time To Blog? (Josh Brown)

For the gun nuts, it’s worth noting the hardware in my typing guns picture. In my right hand: Ruger Mark 3, .22 calibre. In my left hand: Springfield XD, .40 calibre. On table right side: Ruger GP 100 revolver, .357 calibre. Also when I got home from my trip, I surfed more carefully and found a Riggle typing guns pic after all. Still no video though. Please send me one if you find it!