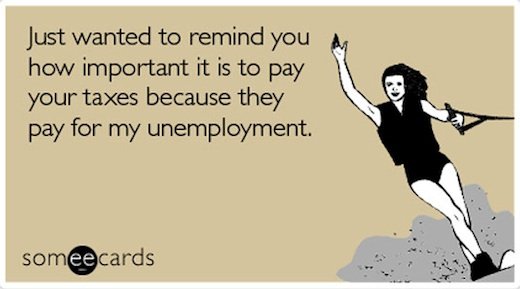 Friday is the big Bureau of Labor Statistics jobs report for October. Markets expect 88k-100k new jobs created in October and unemployment to hold at 9.1%. Through September, the economy added 1.074m jobs or 119k/mo, but there are still 6.6m fewer jobs than the beginning of the recession in December 2007.

But don’t worry, someone’s profiting from the misery:

Last month Hallmark released a new line of job-loss sympathy cards aimed at providing encouragement to those who are struggling in this tough economy. The popular humor ecard website Someecards started creating unemployment-themed cards back in 2008. “It felt like an opportunity to make people laugh and connect while they are going through tough financial times,” says Brook Lundy, co-founder and head writer at Someecards. “People can express sympathy while maintaining a sense of humor.”

Derek McCracken, creative director with Hallmark Greeting Cards says the idea came not from Hallmark but from the consumers themselves. “They sent us letters. They phoned it in. They asked their retailers, you know, in their neighborhood, where do I find a card that says this?” he told NPR.

Likely story Mr. McCracken. But a well written card can certainly help, so I can’t bust on the card companies too much.

I remember I got a card back in 1997 when I was in the depths of hating a horrible job. It was a tissue saying this to a roll of toilet paper: “So that’s what I do. I can’t think of anything worse. What about you? What do you do?”

I obviously still remember it all these years later, so they were doing something right.
___
Further reference:
–Hallmark Capitalizes On Unemployment
–Jobs & broader market preview this week
–Dates Recession Began/Ended

“Maureen is an amazingly well organized and detail oriented professional and knows exactly what it takes to prepare a house for sale. She was always calm and unflappable, a skilled negotiator and her thoughtful guidance contributed to the sale of our home at a price 10% above asking. We cannot recommend her more highly!” It […]