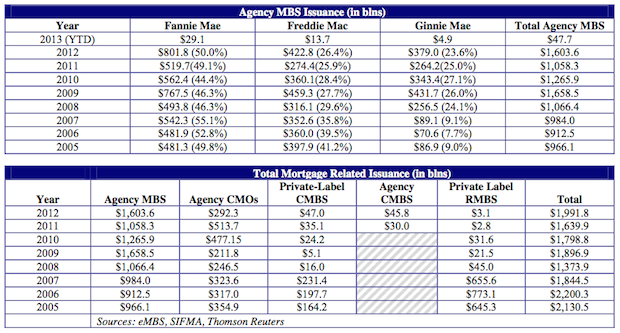 Below are tables as of Friday from the Reuters MBS team showing total issuance year-to-date as well as 2005-2012. Table 2 comparing 2012 agency (aka government-backed) issuance of $1.6 trillion with non-agency issuance of $3.1 billion underscores the dominance of government in home finance.

That said, the non-agency market thawed considerably in 2012, and that trend will continue in 2013. A late-December Bloomberg story recapping 2012 MBS stats provides some additional perspective on this.

– Issuance of securities guaranteed by government-supported Fannie Mae and Freddie Mac or U.S.-owned Ginnie Mae has climbed to $1.72 trillion [in 2012], compared with $1.22 trillion last year and $1.73 trillion in 2009, according to data compiled by Bloomberg.

– With weekly rates on 30-year home loans falling to record lows eight times since July [2012], the first increase since 2009 in refinancing has driven total lending to almost $1.8 trillion this year, double a forecast from the Mortgage Bankers Association in October 2011.

– Sales tied to new home loans [without government backing] quintupled to $3.5 billion [in 2012], compared with the record annual pace of $1.2 trillion reached in 2005 and 2006, Bloomberg-compiled data show.

– [In 2013] sales of non-agency securities may rise to $20 billion to $30 billion, according to JPMorgan analysts, while Bank of America sees $30 billion and Barclays forecasts a climb to less than $20 billion. Private investors may be called on even more as Fannie Mae and Freddie Mac are pushed to create separate securities that transfer some of their default risks.

This is why many believe non-agency MBS will be the best fixed income bet of 2013.