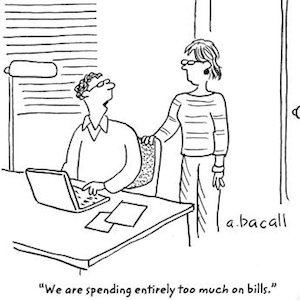 The budget war in DC is political posturing and nothing more. Money manager Michael Ashton, who goes by Inflation_Guy on Twittter, wrote a great piece breaking down the issue in terms we can all understand. Below are those excerpts from his must-read full budget piece:

Incredibly, the U.S. government is 24 hours away from a partial shutdown and furlough of 800,000 “non-essential personnel.” The battle is between the Republicans’ proposal to cut $61bln from the deficit and the Democrats’ $33bln proposal. The Republicans, controlling the House of Representatives, insist on their number; the Democrats say this would destroy the economy, old people, and orphan children with a limp.

Now, I can tell you that the 2012 budget expenditures as proposed by the President are supposed to be $3.7 trillion, and point out that these two numbers are literally rounding error, but the numbers are so big as to be meaningless. So let me try a couple of images.

Or, let’s say that ten years ago you weighed in at 190 pounds. Well, you’ve sort of let yourself go and you now weigh 380 pounds. But you can advance to the next round on The Biggest Loser if you can trim six pounds over the next year. “Forget it,” you say. “I love my Haagen-Dazs!”

And does this problem start to sound anything like what Portugal experienced? Greece? Enron? It isn’t the balance sheet that fells most countries and companies – it’s the cash flow statement.

Is there a way out? Not a pretty one. Cutting hard on the deficit might well stimulate the economy after the initial harsh blow, but if our leaders are arguing over $61bln or $33bln I doubt we will soon see $500bln pass.