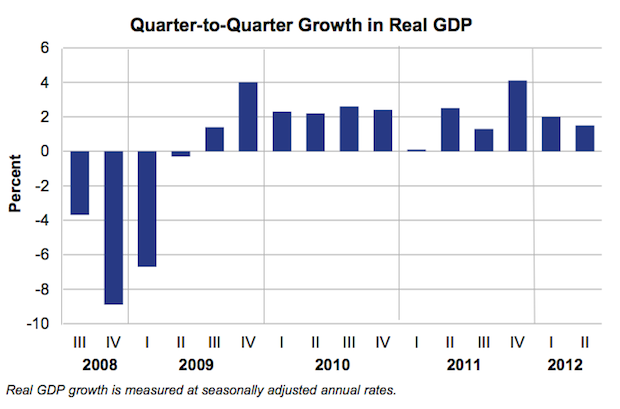 Below is a rundown of U.S. fundamentals today. Rates are up today as the MBS selloff gains steam into the afternoon, and continues a selloff that began yesterday. The benchmarks lenders reference for consumer rate pricing are down: FNMA 30yr 3.5% coupon -22 basis points, and 3.0% coupon -38 basis points.

The GDP Deflator (an index of inflation which weighs each component according to its contribution to GDP) was +1.6%.

Market reaction to this has been positive for equities and negative for mortgages (MBS) and Treasuries because, as dismal as +1.5% is, worse was expected.  If equities are rallying because GDP is a whopping +1.5%, then the economy is in serious trouble.

Markets have put themselves in a bad spot.  On Thursday they bought the notion that the ECB is somehow going to ease the mess in the EU and today they are rallying bacause U.S. GDP is bad but not as bad as expected.

The second of three GDP reports will be released August 29. Here’s today’s GDP report, and below is a chart of GDP 2008 to present.

University of Michigan Consumer Sentiment (July 2012)
– Index was 73.3 up from 72.0.  In my view, this index is useless in the months before a Presidential election.  People polled are likely to reveal their political slant rather than their predisposition to buy stuff.