[EDITOR’S NOTE: Sorry this one is late but here’s last two days of Fundamentals]

-Here we go again. The bifurcation of core and overall CPI is here to address once more. The overall CPI is of greater intrest to the consumer because the consumer eats and buys gas. The core (less food & energy) is of greater interest to the economist because the economist knows that food and energy prices bounce around and that, in the longer term, it is core that tells where inflation is going. Media coverage of this topic is terrible because it emphasizes gasoline prices and makes an easy topic for the clueless to discuss. In addition, the fact is that gasoline is the only item the price of which is displayed in 18″ tall letters every few blocks.

-Industrial Production had to slow down because of slower Retail Sales in the 4Q which led to excess inventories. With Retail Sales reporting stronger earlier this week at +1%, the supply side may pick up again.

-This week’s very large increase in the 10-year Treasury yield can only be justified by the belief that the economy is picking up and inflation will exceed what the Fed wants. Core CPI should be the yardstick. In my view, market participants have been taken by the economic media. Keep in mind that a lot of Treasury trading is done by the parties on the edges of the market. These are not investors but people in the market for short term gains.

-If the sharp increases in Treasury yields in the previous two days have any validity it would evidence itself in inflation. PPI here is a bit higher that we want but in no way justifies the run-up in yields.

-These show a modestly improving jobs market. While this data still does not show the improvement we need to get unemployment to an acceptable level, we are well past the worst part of the cycle and heading in the right direction albeit slowly.

-Here’s a weekly graph and a long-term graph from St. Louis Fed:

Empire State Manufacturing Survey (March 2012)
-Index of manufacturing conditions in NY region rose to 20.21 for March, up from 19.53 in February
-Zero is the dividing line between expansion and contraction
-This is the fourth consecutive monthly gain
-Highest level since 20.29 in June 2010 and sharp recovery from -7.22 in October 2011 (source)
–Full report 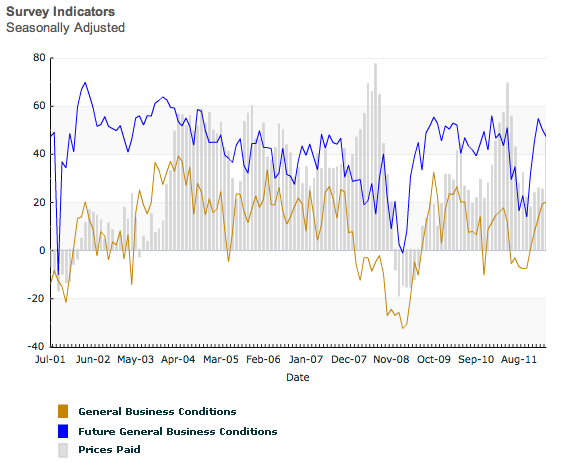 Philadelphia Fed Manufacturing Survey (March 2012)
-Index of manufacturing activity in Philly region rose to 12.5 for March, up from 10.2 in February
-Zero is the dividing line between expansion and contraction
-This was highest reading since April 2011
-Region is: Eastern Pennsylvania, Southern New Jersey, Deleware
–Full report 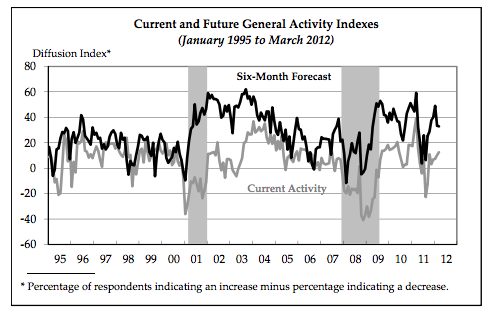