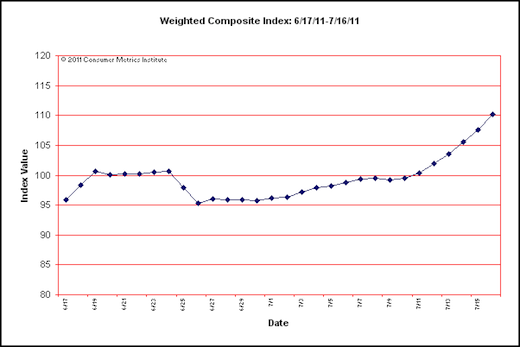 There are no important economic fundamentals today, but here’s this week’s outlook and there is an interesting indicator of consumer spending from Consumer Metrics. This is a measure of online shopping. Recently it shows a healthy recovery for the first time in 19 months. This difficulty (in part because this index is relatively new) is understanding how it correlates with overall Retail Sales.

The Consumer Metrics data indicates that consumers decreased discretionary spending at the start of 2010 and that the January 2010 to June 2011 contraction was just as bad as the 2008 recession. There is s strong negative correlation between gasoline prices and discretionary consumer spending. What is interesting about that notion is that it would indicate that increased gasoline prices—one of the consequences of QE2—actually hurt consumer spending. If this were true it might mean that another round of QE would benefit those who make profits by trading commodities and hurt the average family and decrease discretionary consumer spending. This is precisely the opposite effect from what is desired.