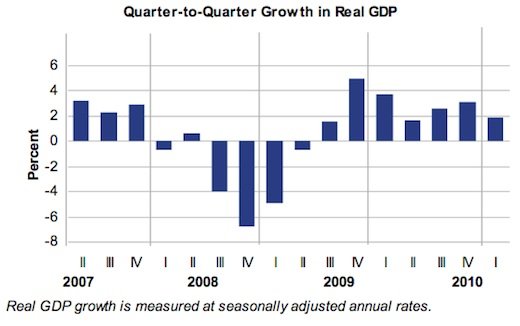 GDP:
– Final 1Q2011 1.9% vs. 3.1% for 4Q2010
– Imports up sharply, exports slowed
– Consumer spending slowed, partly from slowdown in autos/parts
– Government spending fell much more than in 4Q
– Decline in federal spending (mainly defense) largest since 1Q2000
– Decline in state and local spending largest since 2Q1981
– Business investment slowed, mainly from downturn in structures
– First of three 2Q2011 readings due July 29
– Most telling in the report is this: “Final sales of domestic product were revised to an annualized 0.6% from the initial estimate of 0.8%.” Final sales of domestic products is the “core” of GDP. The heart of GDP growth is much weaker than the headline number.