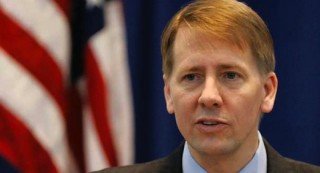 Where we left off December 8, the Senate blocked Obama’s nomination of Richard Cordray to head the Consumer Finance Protection Bureau. But today Obama installed Cordray anyway–the Constitution allows presidents to make appointments while the Senate is in recess.

It’s a controversial move, but it’s done according to Bloomberg.

Fun Fact: Cordray was a five-time Jeopardy champion in 1987 (bio).

Cordray will become a household name in the mortgage industry because the CFPB is revamping Federally-required mortgage disclosures as you read this. They’ve been soliciting consume and industry feedback for months on how to simplify the awful consumer disclosures that were implemented January 2010.

And BusinessInsider explains why Wall Street is afraid of him.

And now for a Jeopardy joke…

The Answer: Greater consumer confusion and more work/cost for lenders

The Question (for $1000!): What is the result of CFPB’s new mortgage disclosures?