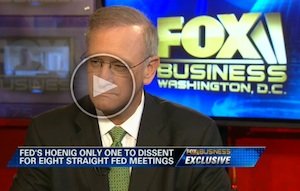 In the classic movie Big, Tom Hanks, a boy trapped in a man’s body, watches 40-something toy company executives pitch a new toy and responds with a simple boyish dissent: “I don’t get it.” This direct approach breathes new life into a staid environment, reinvents the toy, and the company goes gangbusters. It’s not quite that simple in real life but the example underscores the importance of dissent—especially in staid environments.

The Fed is one such staid environment, and Kansas City Fed president Thomas Hoenig is the lone dissenter on Fed policy. He doesn’t get why the Fed is still so accommodative this long after the crisis. He voted against near-zero rate policy at every FOMC meeting of 2010, and is also wary of quantitative easing. He’s now rotated off a voting seat on the FOMC (the Fed’s rate setting body) but he sits in FOMC meetings. He explained his rationale (and defended his role of Dissenter in Chief) in a speech last month. The short of it is that he expects the economy to grow about “3.5% to 4% over the next couple years” and thinks the Fed may be doing what many accused Greenspan of: keeping monetary policy too loose for too long and risking inflation and asset bubbles. If you don’t have time to read the speech, here’s Hoenig’s FoxBusiness interview today. He’s not breathing new life into the Fed yet, but at least he’s getting his message out.