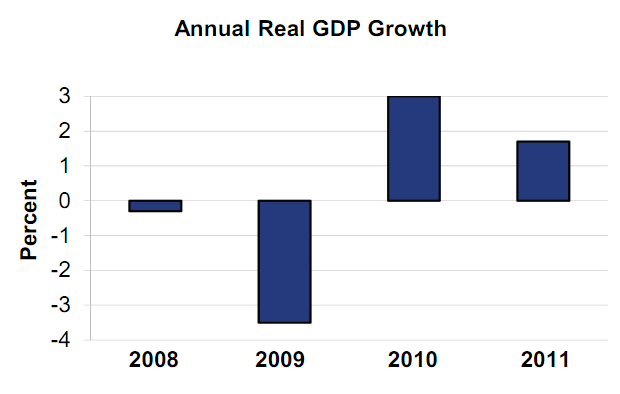 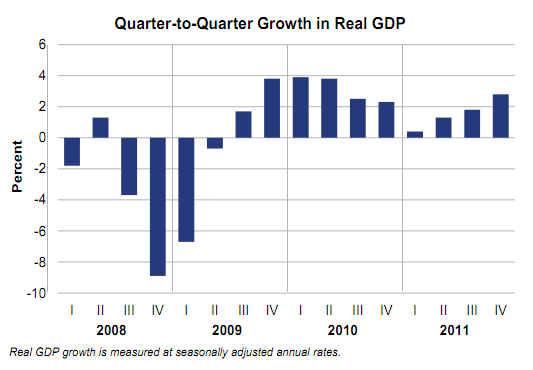 Today the first of three looks at 4Q2011 GDP came in at 2.8%. This advance estimate has the disadvantage of having only 2 of 3 months data for many of the components.

Being this far into what is supposed to be recovery, +2.8% is weak. Much of the increase was in private inventories. This is business getting in front of the consumer and if the consumer does not keep place inventory levels will shrink. Consumer spending was +2.0% in 4Q2011.

We must also note that the leading indicator produced by Consumer Metrics Institute spiked up in June and July and with that leading GDP by three months we saw growth in consumer spending at the start of the 4Q2011 but that growth subsided. Consumer Spending in October was +0.7% and in December it had tapered to +0.1%. The data say that during this 4Q2011 the consumer slowed spending month-to-month. With the Consumer Metrics Institute index remaining low at present we are likely to see very flat GDP in the present quarter.

GDP is not simply about the consumer. For 2011 all government spending (Federal, state and local) dropped 2.1%. This is the largest drop in the past 40 years. The collapse of the housing bubbles and subsequent reduction in real estate taxes have been tough on local governments. Increasing local real estate tax rates is a sure formula for driving away businesses and sending real estate into disrepair. Good examples are much of upstate New York and the City of Baltimore.

When I first started writing this, WSJ painted a rosy picture of 4Q2011 GDP in its online headline. That is now scaled back to “U.S. Expands, but Questions Persist.”

The sad fact is that current fiscal policy cannot be sustained unless we have GDP growth of about 4.5% and that appears to not be happening any time soon.

This GDP report and what is happening in the EU are prefigurations of a very long period of economic stagnation.

The only good news is the likelihood of lower rates.
___
Reference:
Full 4Q2011 GDP Report