Just over a year ago I discovered the Consumer Metrics Institute. What I liked about is was that it provided another way of measuring the economic health of the nation. Consumer Metrics recognizes that many “leading indicators” are simply useless. It focuses on the consumer and measures what the consumer is doing virtually in real time. It looks at the narrow subset of on-line discretionary consumer spending. The notion is that discretionary consumer spending is the most volatile part of the economy and that by looking at this data one can see contractions and expansions before any other leading indicator sees them.

The guy behind Consumer Metrics Institute is Rick Davis. The following is Rick’s take on last Friday’s GDP report. This is reproduced here with his permission.

Included in the BEA’s first (“Advance”) estimate of second quarter 2011 GDP were significant downward revisions to previously publisheddata, some of it dating back to 2003. Astonishingly, the BEA even substantially cut their annualized GDP growth rate for the quarter that they “finalized” just 35 days ago — from an already disappointing 1.92% to only 0.36%, lopping over 81% off of the month-old published growth rate before the ink had completely dried on the “final” in their headline number. And as bad as the reduced 0.36% total annualized GDP growth was, the “Real Final Sales of Domestic Product” for the first quarter of 2011 was even lower, at a microscopic 0.04%.

And the revisions to the worst quarters of the “Great Recession” were even more depressing, with 4Q-2008 pushed down an additional 2.12% to an annualized “growth” rate of -8.90%. The first quarter of 2009 was similarly downgraded, dropping another 1.78% to a devilishly low -6.66% “growth” rate. And the cumulative decline from 4Q-2007 “peak” to 2Q-2009 “trough” in real GDP was revised downward nearly 50 basis points to -5.14%, now officially over halfway to the technical definition of a full fledged depression.

One of the consequences of the above revisions to history is that the BEA headline “Advance” estimate of second quarter GDP annualized growth rate (1.29%) is magically some 0.93% higher than the freshly re-minted growth rate for the first quarter. From a headline perspective, that makes for a far better report than the 0.63% drop from the previously published 1Q-2011 number — since otherwise the new 2Q-2011 numbers would be showing an ongoing weakening of the economy.

Unfortunately, meaningful quarter-to-quarter comparisons are nearly impossible in light of the moving target provided by the revisions. But among the notable items are:

– Aggregate consumer expenditures for goods was contracting during the second quarter, with annualized demand for durable goods dropping 4.4% during the quarter — into the ballpark of the numbers we have measured here at the Consumer Metrics Institute. This decline was enough to shave 0.35% off of the overall GDP (with just automotive goods removing 0.65% from the annualized GDP growth rate).

– The drag on the GDP from governmental cutbacks purportedly moderated by a full percent, improving to a -0.23% drag from a revised -1.23% impact in the first quarter. This reversal may be the result of either the waning effect of expiring stimuli or overly optimistic BEA “place-holders” while more data gets collected. Many state and local public sector employees would be shocked to learn that real-world governmental downsizing has moderated.

– Net foreign trade added 0.58% to the GDP growth rate after subtracting 0.34% during 1Q-2011 (a 0.92% positive swing) — all in spite of oil prices reaching recent peaks at the end of April. Anomalies in imports caused by tsunami suppressed trade with Japan may have been the culprit here, since the growth rate in exports (and their contribution to the overall GDP growth) actually dropped quarter-over-quarter. Imports reportedly pulled overall GDP down by only 0.23%, after subtracting 1.35% from the revised figures for the prior quarter.

– Commercial Fixed Investments contributed 0.69% (over half) of the reported annualized growth, up over 50 basis points from the revised contribution for the first quarter. Inventory building contributed an additional 0.18% to the growth rate, although that number is only about half of the boost provided in the revised 1Q-2011 data. These are the only two really positive signs for the economy contained in the report.

– Working backwards from the data, the BEA effectively used an aggregate annualized inflation rate of somewhere near 2.39% to “deflate” their top-line total nominal data into the “real” data used for their headline numbers. This was after raising the aggregate deflater effectively used for the first quarter to somewhere near an annualized 2.72% rate
– indicating that the BEA believes that (for the purposes of their headline number) inflation moderated somewhat during the second quarter. They wrote in their July 29 press release that:

We understand that the aggregate “deflater” has to use numbers appropriate to the individual line items being deflated, including producer price inflation data and foreign exchange inflation rates (although 2.39% might be modest for most of those as well). But if the unadjusted trailing 12 month price changes in CPI-U (3.6%) recorded by the Bureau of Labor Statistics (the official source of U.S. Government inflation data) is used to “deflate” the nominal data, the actual “real” growth rate for the second quarter drops to 0.011% (slightly over 1 basis point), which the BEA would normally round to zero. It is likely that the entire reported growth rate for the second quarter is actually an artifact of under-recognized systemic inflation.

The Numbers (as Revised)

As a quick reminder, the classic definition of the GDP can be summarized with the following equation:

or, as it is commonly expressed in algebraic shorthand:

For the first quarter of 2011 the values for that equation (total dollars, percentage of the total GDP, and contribution to the final percentage growth number) are as follows:

The quarter-to-quarter changes in the contributions that various components make to the overall GDP can be best understood from the table below, which breaks out the component contributions in more detail and over time. In the table we have split the “C” component into goods and services, split the “I” component into fixed investment and inventories, separated exports from imports, added a line for the BEA’s “Real Finals Sales of Domestic Product” and listed the quarters in columns with the most current to the left (please note that nearly all of the numbers below for earlier quarters are changed from our previous commentary
tables): 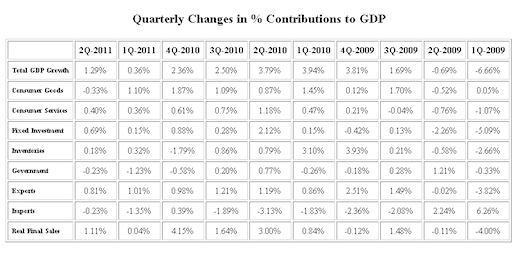 For the most part the “Advance” GDP report for the second quarter is positive only in comparison to newly reworked numbers for the first quarter:

– The good news is that commercial investment appears to be improving and inventories are no longer growing at the previously unsustainable rate.

– But the bad news is that consumer spending on durable goods fell substantially during the quarter, dropping quarter-over-quarter by 4.4%.

– Some of the other favorable data, including foreign trade, are likely the result of one-time anomalies (e.g., tsunami suppressed imports).

– The “deflater” used to translate the nominal data into “real” data continues to suffer from credibility issues, and it may be the entire source of the reported growth.

The greatest problems in the report, however, were the massive revisions to past history — including the very recent past. For both the first quarter of 2011 and the worst quarters of the “Great Recession” those revisions were substantial enough to raise questions about the reliability of any of the recently reported BEA data:

– Data published as recently as 35 days prior had growth rates slashed by over 80%.

– The worst quarter of the “Great Recession” was revised downward by over 2%, with the annualized “growth” rate now reported to be a horrific -8.9%. And the “peak” to “trough” decline in real GDP for the “Great Recession” is now recognized to be over 5%, halfway to the clinical definition of a full depression.

We have been concerned for some time about the timeliness of the BEA’s data, particularly given how much the nature and dynamics of the economy have changed since Wesley Mitchell initially developed the data collection methodologies in 1937. These past revisions, however, lead us to believe that the problems run far deeper — as demonstrated by a quarter that is now over 2 years old being just now revised downward by an additional 2%. This begs two simple questions:

– At what point in time can we trust any of the data contained in these reports?

– How can any of the current data be used to create meaningful Federal monetary or fiscal decisions?

We wonder what Mr. Bernanke thought when told that 80% of his “relatively slow recovery” during the first quarter had just vaporized …