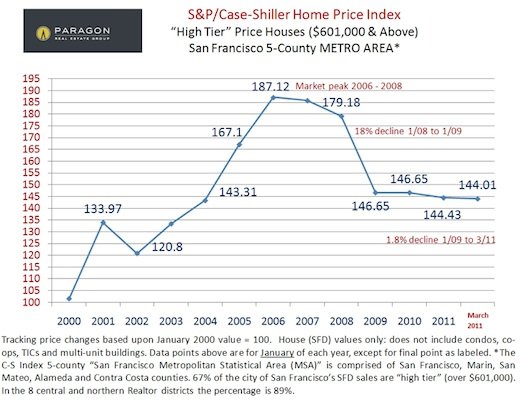 Tomorrow’s April S&P Case Shiller home price report is the most widely followed and respected barometer of its kind. But like all datasets, there’s lots of fine print that’s overlooked by media and markets. As good as Case Shiller is compared to other home value sources like Zillow, real estate valuations are highly-localized and it takes local expertise to decipher it.

That’s what Patrick Carlisle, market analyst for San Francisco-based Paragon Real Estate Group, did last week. And he’s allowed me to reprint his analysis in full below. What Case Shiller refers to as “San Francisco” is actually a 5-county area, and Case Shiller methodology is similarly broad for all of their 20 core “cities.” So even if you’re not from the Bay Area, this is a relevant read. And a link to Case Shiller’s methodology is at end of the post.

The news media regularly reports that the S&P Case-Shiller Home Price Index has indicated large and continuing price declines in San Francisco, not only since the market meltdown in late 2008, but since the period commencing thereafter in early-mid 2009. This is based upon the C-S analysis of home sales in the 5-county San Francisco Metropolitan Statistical Area (MSA), comprising SF, Marin, Contra Costa, Alameda and San Mateo counties. The statistics (and price declines) quoted by the media are almost always for the overall aggregate San Francisco MSA price trend.

First of all, it should be noted that the C-S Index measures price trends for houses only (single family dwellings or SFDs) — condos, co-ops, TICs and multi-unit buildings are not included.

The “High Tier” price range is defined by C-S in March 2011 as those homes selling for over $601,000. In the city of San Francisco, over the past 17 months, 67% of all our house (SFD) sales were over $601,000. If we exclude the two least affluent, southern Realtor districts running from Bayview to Oceanview (hit hardest by foreclosures and distress sales), and look only at the 8 central and northern Realtor districts, then 89% of our house sales were over $601,000 and thus in the “High Tier.” (Just for the record, the majority of our condo sales is also above $601,000.)

The 5-county, SF Metro Area SFD housing stock — in all price tiers — in year 2000 was approximately 948,000 SFD units. The city of San Francisco contains about 114,000 SFD units — or only 12% of the metro area total. Thus the overall Index is heavily skewed toward the markets of the other 4 counties. However, the city’s percentage of total metro area SFD units in the high price tier would be significantly greater.

It’s obvious that the Case-Shiller High-Tier Price Index for the San Francisco MSA is the one most applicable to the real estate market of the city and county of San Francisco.

Which brings us to the chart below:

Looking at the chart of C-S Index “High Tier” price points in January of each year since the year 2000, we see the massive appreciation from year 2000 to peak values in 2006 – 2008 (different neighborhoods of the Bay Area and the city peaked at different times within that time period); then an 18% – 22% decline to January 2009, after the September 2008 market meltdown had taken place.

That seems correct as an overall average for the price adjustment that generally occurred in San Francisco’s 8 central and northern districts. To indicate the scale of the differences in impact on the respective price segments and on the different areas of the Bay Area, the Case-Shiller measurement of price declines from peak value to January 2009 for the “Low Tier” price segment (under $325k) was a staggering 58%; and for the “Middle Tier” ($325k to $601k) a still huge 38%. Compared to the “High Tier” decline of a very significant, but much lesser 22% most applicable to SF’s 8 more affluent districts. (The 2 southern SF districts, dominated by sales in the upper-low and mid price tiers and hard hit by distress sales, saw declines typically running from 30% to 45%.)

Thus, mixing all the price tiers together in the overall Case-Shiller Index seriously misrepresents market conditions in San Francisco itself.

The overall aggregate Index indicates a decline of 42% during this period, almost double the price decline percentage for the “High Tier” price segment only.

Post market meltdown, since January 2009 to March 2011 (the latest C-S data published), over a period of 26 months, the C-S Index for “High Tier” priced homes shows a further 1.8% decline in value. Even if one refuses to consider a reasonable margin of error in the C-S calculation (or that most of San Francisco houses should actually be in a new “Upper High Tier” category), a price adjustment of less than 2% comes pretty close to what we’ve concluded for quite some time, i.e. generally speaking, San Francisco has experienced a basically stable home price market in the city over the past 2 years, especially in our 8 more affluent districts where the median house sales price is typically above $850,000.

Indeed, though not shown on the charts, the Case-Shiller Index recorded a very small uptick in High Tier home values in March 2011 for the SF MSA. Based upon what we’re seeing in the city market, both statistically and in the hurly burly of deal-making — i.e. a significant tightening in the supply and demand dynamic within SF — we believe there is a good chance the Index will indicate further upticks in High Tier home prices in April and May.

As always, time will tell — the economic recovery is still fragile and the world is a very uncertain place right now. For a more complete overview of market trends in San Francisco, there are links to additional analyses below. And further information on the data points and methodology of the S&P Case-Shiller Home Price Index is publicly available.