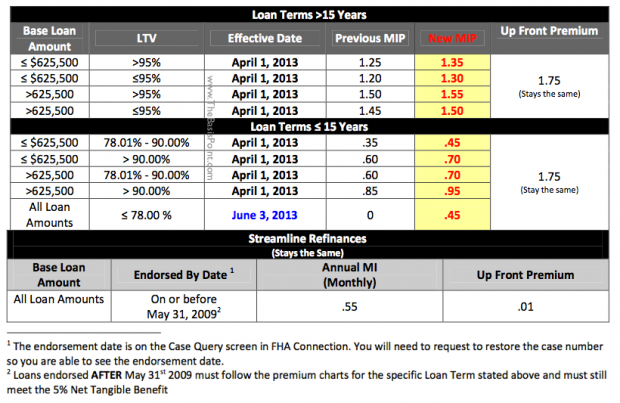 The tables below summarize each set of changes.

To get a Case Number in time for the April 1 deadline, borrowers should plan to apply with a lender no later than March 25.

To get a Case Number in time for the June 3 deadline, borrowers should plan to apply with a lender no later than May 24.

REASON FOR CHANGES
FHA was a critical player during the housing bust, increasing eligible loan amounts to take up a lot of slack left as private mortgage insurance providers tightened guidelines so much they became unreliable for borrowers with less than 20% down. But lending during the bust, while helpful in preventing an even worse economic outcome, left the FHA short on reserves. HousingWire reports:

If the FHA’s sobering financial audit released in November is any indication, there’s a decent chance that the president’s budget will include such a request. That audit — which is separate from the president’s budget review — projects the agency will require an additional $16.3 billion to cover all expected claims through 2042, beyond the $30.4 billion now in the agency’s coffers. Even if the agency stopped receiving revenue, it would still have enough cash on hand to settle insurance claims for the next seven to 10 years, according to auditors.

This is why they are increasing mortgage insurance fees and the length of time a borrower must pay them.

BORROWER IMPACT OF CHANGES
This up-trend has been going on since 2010, when the annual premium was .55% to.6% of the loan amount, paid monthly. So on a $500,000 loan the monthly mortgage insurance was $229. Not a bad tradeoff for putting just 10% down, especially when you consider that if they paid the loan down to 78% of original purchase price in the first five years (or anytime thereafter), their mortgage insurance goes away.

That 11 year threshold means the home has 33% equity based on normally scheduled mortgage payments with no extra principal pay down by borrower. These new rules give the FHA more padding, but they remove the option and incentive for a borrower to pay down extra to eliminate the mortgage insurance sooner.

Right now, and until June 3, if a borrower paid their normal mortgage payment (without making any extra principal payments), they would be able to eliminate their mortgage insurance in about 6 years—and if they wanted to do it more aggressively they can pay a bit extra to knock it out in 5 years.

So there’s a small window left for borrowers with less than 20% down to capture the current FHA rules (application deadlines above).

After that, we may see the pendulum swing away from FHA and back toward private mortgage insurance (PMI). The PMI companies have eased approval guidelines a bit as the recovery trudges on, and their fees are definitely cheaper, ranging from .64% to 1.02% depending on credit score (or $267/mo to $425 on that same $500,000 loan example used above). But their approval guidelines are more stringent than FHA.

So from here out borrowers with less than 20% down need to look at both options.