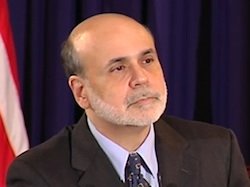 Below is a link to Bernanke’s full Jackson Hole speech today along with underlined emphasis from CreditWritedowns. Bernanke didn’t expand on monetary policy nor explicit QE3 clues beyond what was already provided in the August 9 FOMC statement. He said that those topics would be explored more deeply at the next FOMC September 20-21.

The speech focused on fiscal policies needed to fix the economy—take note Congressmen, and watch this video from Kansas City Fed president Thomas Hoenig, he’s always put his money where your big mouths are. Rates are modestly better this morning, but it’s more from a weaker 1% 2Q2011 GDP reading and than from anything Bernanke said.