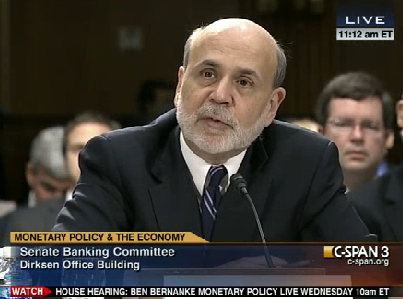 Here are most noteworthy items from Bernanke’s Congressional testimony and Q&A with lawmakers this morning.

HIGHLIGHTS OF Q&A WITH LAWMAKERS
– On continuing/adding government supported refinance programs: If borrowers can refinance they can spend more. But what are the subsidies to continue or add to government refi programs? Is there money coming into government to offset it?

– On mortgage finance policy: QRM is required to be no more broad than QM. Needed to do QM first. QM intended to help consumers. QRM for securitization. 6 agencies looking to make QRM identical to QRM. [I didn’t quite follow this because QM is a set of rules making sure lenders properly approve borrowers and QRM is about lenders retaining risk in loans they originate and securitize. So if anyone has more color on this, please comment below.]

– Sequestration would hit GDP to tune of -0.6% in 2013. That’s from CBO and we think it’s reasonable estimate.

– Financial stresses in Europe less today than last couple years. But unemployment is rising not falling, which hurts U.S. as does weakened export demand.

– Monetary policy is no panacea. Fiscal policy decisions being made are mismatched with the problems. Congress needs to balance timing of fiscal needs. Translation: Congress is can-kicking rather than solving long-term problems.

– On Fed exit from QE: We have belt and 2 pairs of suspenders to exit from QE at the appropriate time. Not too early and not too late. To normalize our balance sheet, we will sell assets or raise interest we pay on reserves. We’re tying asset purchases to condition of the economy. We’re having this debate in public and trying to do right balancing of objectives.

– On Fed making or losing money: All Treasury and MBS (aka Agencies) assets on Fed balance sheet are performing (and “we can only buy Treasuries or Agencies).”

– On Italy: market is reacting to uncertainty, they don’t know which way things will go. U.S. bank exposure to Italy “moderate,” “would not substantially affect stability of banking sector”

– Bernanke to GOP senator from Tennessee Bob Corker who was accusing Bernanke of being dovish and starting a currency war: “None of the things you’ve said is accurate.” [Transcript of that exchange]

HIGHLIGHTS OF PREPARED REMARKS
– Since July, nonfarm payroll employment has increased by 175,000 jobs per month on average, and the unemployment rate declined 0.3 percentage point to 7.9 percent over the same period. Private-sector payrolls up 6.1 million jobs since 2010 low, and unemployment rate down 2%+ since late 2009 peak. Still, job market remains generally weak: about 4.7 million of the unemployed have been without a job for six months or more, and millions more would like full-time employment but are able to find only part-time work.

– Higher gas prices hitting families but overall inflation remains low. PCE Index annual rate has been about 1.5%. Fed anticipates that inflation over the medium term likely will run at or below its 2 percent objective.

– Monetary policy stance still focused on near-zero overnight rates “as long as the unemployment rate remains above 6.5%, inflation between one and two years ahead is projected to be no more than a half percentage point above the Committee’s 2 percent longer-run goal, and longer-term inflation expectations continue to be well anchored.”

– Fed will continue quantitative easing, aka buying agency MBS at a pace of $40 billion per month, reinvesting the proceeds of existing MBS holdings into new MBS securities, and buying longer-term Treasury securities at an initial pace of $45 billion per month. Operation twist, aka maturity extension program that lengthened the maturity of Fed’s securities portfolio without increasing its size, is now complete.

– Keeping longer-term interest rates low has helped spark recovery in the housing market and led to increased sales and production of automobiles and other durable goods. By raising employment and household wealth–for example, through higher home prices–these developments have in turn supported consumer sentiment and spending.

– Bernanke acknowledged risks of easy monetary policy, saying “if further expansion of the Federal Reserve’s balance sheet were to undermine public confidence in our ability to exit smoothly from our accommodative policies at the appropriate time, inflation expectations could rise, putting the FOMC’s price-stability objective at risk. However, the Committee remains confident that it has the tools necessary to tighten monetary policy when the time comes to do so.”

– Keeping rates too low for too long could increase risk in the financial system. For example, portfolio managers dissatisfied with low returns may “reach for yield” by taking on more credit risk, duration risk, or leverage. However, Fed actions also serve to reduce risk in the system by strengthening the overall economy and by encouraging firms to rely more on longer-term funding, and by reducing debt service costs for households and businesses. And up to now, Fed doesn’t see the potential costs of the increased risk-taking in some financial markets as outweighing the benefits of promoting a stronger economic recovery and more-rapid job creation.

– On risks of expanding balance sheet: With the expansion of the Federal Reserve’s balance sheet, yearly remittances have roughly tripled in recent years, with payments to the Treasury totaling approximately $290 billion between 2009 and 2012. However, if the economy continues to strengthen, as we anticipate, and policy accommodation is accordingly reduced, these remittances would likely decline in coming years. Federal Reserve analysis shows that remittances to the Treasury could be quite low for a time in some scenarios, particularly if interest rates were to rise quickly. However, even in such scenarios, it is highly likely that average annual remittances over the period affected by the Federal Reserve’s purchases will remain higher than the pre-crisis norm, perhaps substantially so. Moreover, to the extent that monetary policy promotes growth and job creation, the resulting reduction in the federal deficit would dwarf any variation in the Federal Reserve’s remittances to the Treasury.
___
More:
– Bernanke’s full comments also have a Fiscal Policy section