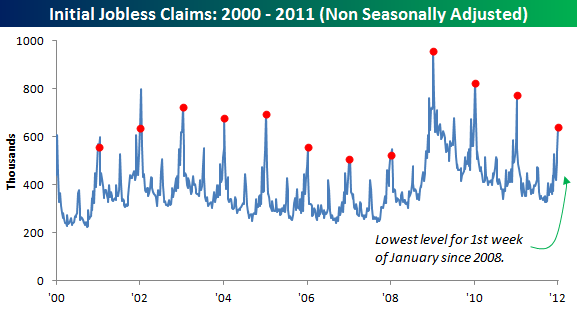 -Initial claims now at highest level since end of November on a seasonally adjusted basis, but still under 400k, a key threshold.

-There were a lot of post-Christmas layoffs presumably from employers such as UPS but this data is seasonally adjusted.

-The Bespoke chart below shows claims on a non-seasonally adjusted basis, and they report that “Even after this week’s reportedly big jump, for the first week of January (red dots), initial claims have not been this low since January 2008.”

-The reality is that the jobs market is still weak despite a decent run for claims before this week.

Business Inventories (November 2011)
-Inventories, Month/Month +0.3%.
-This is more or less in line with consumer demand.

Outlook
This new year is starting poorly. Recent fundamentals are pointing to reduced GDP growth. We have not yet recovered from the mortgage mess induced recession and now the EU is about to start a lengthy period of recession or flat growth. Japan is going nowhere and China will lower GDP growth. Our national fiscal policy is unsustainable. What we have is a formula for lengthy, worldwide recession.

If this is in fact the outcome, the upside is sustained low rates for consumers who qualify for credit.