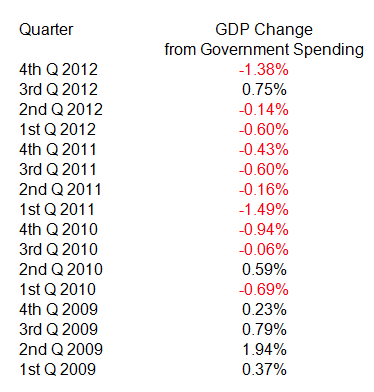 Not since that acorn fell on Chicken Little’s head has impending doom been more exaggerated.

If there is a sequester it will really be only $44 billion in reduced spending this year. The $85 billion is a bogus number $41 billion of which will be cut in future years but which the government (the people who are $16.6 trillion in debt) has a mystic way of accounting for that $41 billion happening in future years as if it is happening now.

The following are the last 16 changes to government spending as a percent of GDP.

The fiscal effect of the sequester is, over the next year, no different from what has already been happening regularly. I am not implying that reduced government spending will not impact GDP. It will. But the extent of the hurt is nothing proximate to claims made by the Administration.

I am someone who is rarely without hope. My personal hope is that the sequester happens, the effects are judged to be near zero and folks realize that government spending – which is now out of control – can be reeled in without significant damage to the economy.