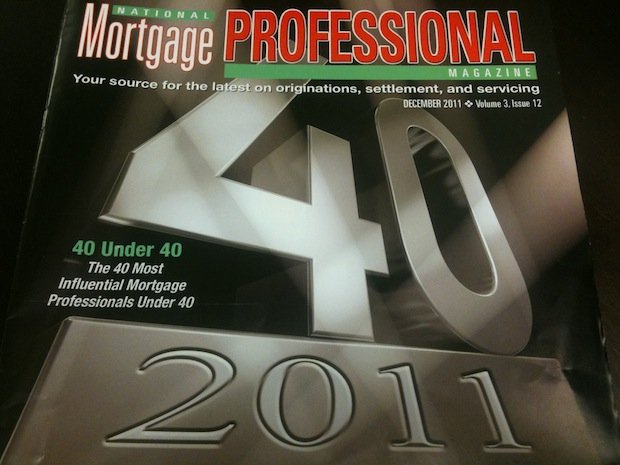 The Bay Area housing market is very busy from where I sit. I’ve been pre-approving lots more buyers in the past two months than is typical for this time of year. It’s quite surprising and encouraging.

I’ve been so fult tilt on 2012 that one cool achievement from December got lost in the shuffle: I made National Mortgage Professional magazine’s “40 Most Influential Mortgage Pros Under 40″ list.

Took pictures of magazine and my excerpt above and below, so please excuse my bad photography. And for those who bristle at self-promotion, I’ll share two thoughts:

First, I usually bristle too but check out number 9 on this list. Cramer is absolutely right: “you have to promote yourself. Nobody else is going to do it for you.”

Second, if its any consolation, I’m also a firm believer in number 10 on that same list. It talks about how you have to be real—to bleed—if you expect people to be interested or take you seriously as a writer. Because people who never make mistakes, always have the markets right, and always have something good to say about themselves are often revealed to be full of crap, boring, or both. The last thing I want to be is That Guy.

That’s why my I’m glad they wrote my 40 Under 40 profile as they did (typos aside), because it’s no bullshit: my primary goal in blogging isn’t to get business—I’m fortunate enough to have steady business through more traditional channels—it’s to be a voice from the housing trenches. A credible, un-boring voice.

I’m not there yet, and it’s mostly because I don’t bleed enough when I write. But I’m working on it.

The main thing I’ve learned since launching The Basis Point publicly two years ago (details) is that it’s incredibly hard for mortgage lenders to blog.

I’d argue it’s harder for mortgage pros than other financial pros like investment advisors because we’re so transaction oriented. We have all the same client relationship and prospecting responsibilities, but then we’re running transactions on top of everything else. And transactions that involve such personal involvement from clients can eat up whole days/nights in a blink.

But that’s why I’ve always remained focused on blogging, and built a lending team that enables me to write regularly. So it may inspire others in my shoes to do the same. Or at least live through some of the stories when I’m bleeding in the good-writer sense of the word.

If I’ve started to become “influential” in the eyes of others, great. But it’s not about influence, it’s about inspiration. A fine line I know, but an important one that divides the self-promoters from the real professionals. 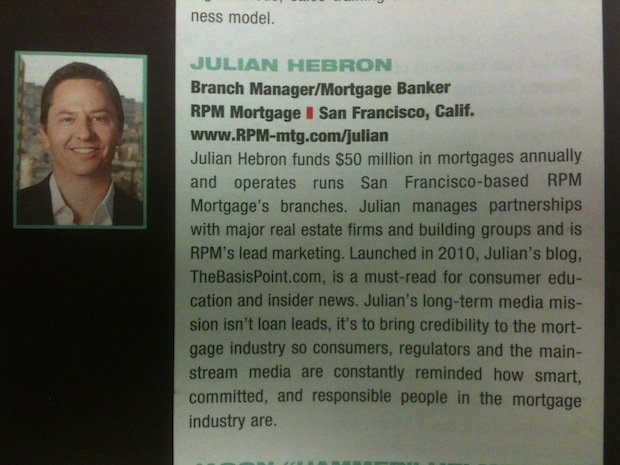