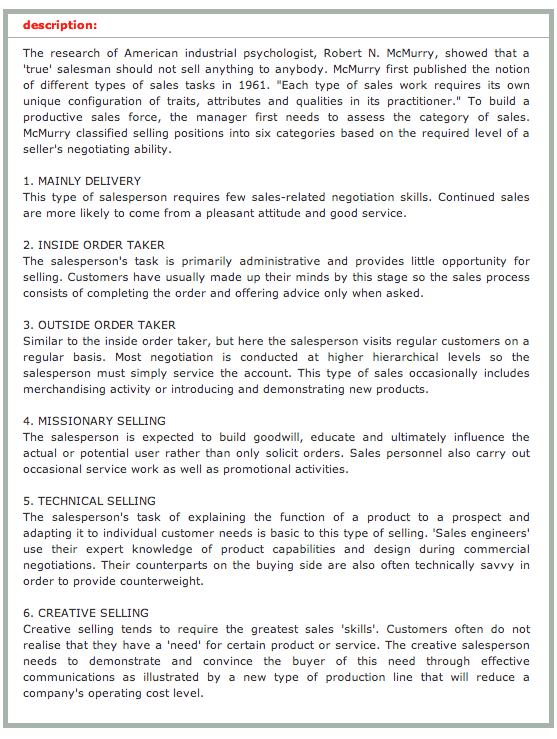 I’ve worked with all kinds of salespeople and awhile back I grouped them into three categories. But my categories pale in comparison to those in a 1961 study by industrial psychologist Robert McMurry.

He said the prime drivers of salesmen are greed, hostility, immaturity.

This is according to a review of two books by The Economist a couple weeks ago exploring whether selling can and should be more scientific.

One book by three McKinsey consultants argues that:

Data, process management and outsourcing can do as much for sales departments as for other areas of the corporation. They should seek to standardise performance by finding out what the best salespeople do and making sure everyone applies the same techniques (which sounds obvious, but not many people do it).

Not that these three McKinsey guys are doing anything other than using their new book to sell their services. But let me just clarify something for them just in case:

The best salespeople are either too busy, too secretive, or their process is too customized to replicate across an organization.

The rest is just consultants like these McKinsey guys selling firms on the idea (and services) they “need” to standardize the selling process. The consultants win, and the best salespeople snooze through the “meet the new consultant” meetings then continue closing deals.

Which is what the other book in The Economist piece is about:

‘The Art of The Sale’ is a descriptive account of the selling business rather than a call to science.

This is where McMurry is invoked. I loved his three drivers because they cut to the point: most salespeople are simple (and often petty) creatures, and no fancy organizational planning will ever change that.

That said, the best salespeople can also rise up to executive ranks then use their in-the-trenches credibility and track record to build/enhance entire sales organizations.

A mentor of mine and I have debated this selling vs. managing topic over the years.

He stopped selling years ago and presides over a massive salesforce. Despite him nudging me toward his path, I keep telling him that I like to sell as I concurrently build/manage my sales team.

My reason: if you’re not in the trenches, it’s really hard to have credibility.

That and I love working with clients.

Anyway, the Economist concludes by invoking the fact that selling is on the wane, citing one of it’s own pieces a few weeks ago on the decline of “sales associate” as a job title on LinkedIn.

But I’ve already noted why that’s a bunch of bullshit (sorry, was that hostile and immature?).

As for the very brief digging I did on McMurry, here’s the best thing I found.

Naturally you’re the best of #5 and #6 right? What a coincidence, me too!

–Can the dubious art of selling become more scientific? (Economist)